How will rising sea levels and ongoing immigration impact life in the city of Thessaloniki?

Several issues concerning the impact of climate change appeared to be relevant in the city of Thessaloniki.

The sea level rise is expected to have an impact on the city of Thessaloniki, because of the increased risk of flooding of waterfronts. A positive effect of climate change is the large quantities of water cause a revival of the Gallikos river and the superfluous water – after supplying the urban complex of Thessaloniki – could be led into the Aliakmon delta. Both the Aliakmon and Axios delta deserve special attention in protection and the preservation, as they are known to host thousands of ducks, mainly during winter months.

Another relevant impact of climate change in Thessaloniki concerns the urban heat island effect. With the increase in heat waves, the demand for free tap water points will increase, so it would be effective for the city to create more places with access to high-quality tap water for its citizens.  In addition, the use of cool sea wind as a ventilation system in the streets, and the shadow of the trees as a cooling system should become a major priority. Also, a heat map alert should be created in order to protect the vulnerable groups from heatwaves. Finally, water activities could also provide cooling at warmer days, such as swimming, which is an activity that increases the potential risk of drowning. Thus, swimming lessons at school and the presence of lifeguards at the nearby beaches are important to secure the safety among bathing children.

Since nearly 70% of European tourists spend their holidays at a waterside location, Thessaloniki should grab the opportunity and increase the use of blue spaces in the future. The long waterfront offers great potential to develop healthy blue and green spaces. Stakeholder engagement and acceptance could increase the insights into needs and ideas on the contribution of measures to resilience, especially when coming from neighbourhood residents contributing to plans for creating more blue and green spaces within the city.

In addition, digitalisation may stimulate the development of smart urban water management, including smart climate resilient water management. Big data management and Internet of Things will have a major role for the development of a blue space-friendly environment for the tourists and the residents of the city, concerning the management of urban transportation, water and energy resources, wastes and weather information. As the beaches of Thessaloniki are far from the centre, free transportation measures should be taken into consideration, in order to provide access to the beaches to everyone. This is even more important than the issue of gentrification, that has been identified as a potential risk for urban cohesion in different parts of the city.

Currently, 6.2% of the population in Thessaloniki has a foreign nationality, the majority being located in the Western districts. Moreover, due to the vast arrival of immigrants in 2018-2019, socio-economic information on newly arrived Middle-Eastern immigrants is lacking, and thus, it is more difficult to integrate them in the local society. There is a need to set up first-encounter facilities where the immigrants and the refugees will be assessed concerning their background in order to use their skills in relevant jobs or send their children to suitable schools.

Written by By Ilias Frydas. 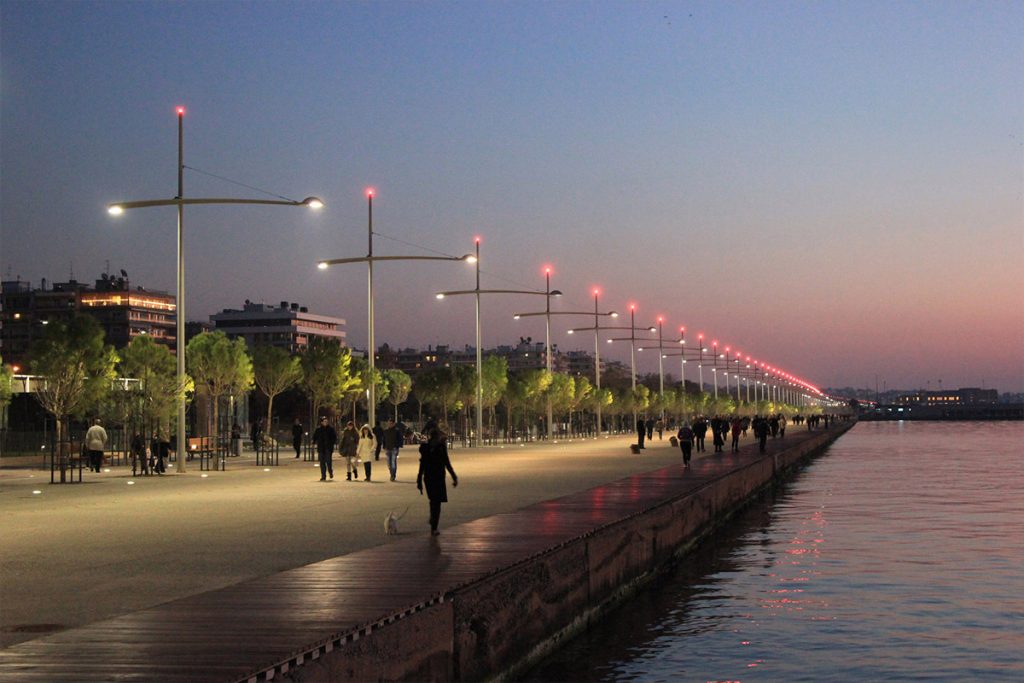 People walk along Thessaloniki’s Waterfront as the sun sets.