Some of the greatest advances in public health came with the realisation that people’s working and living environments might have a profound effect on health.

This perspective created a polarised view of the natural and man-made world; one in which the environment is seen as a source of potential threats that need to be avoided or managed.

Yet we know that natural environments can also provide opportunities to improve health and wellbeing. So in 2009, as this nascent area of research was beginning to grow, we formed an interdisciplinary team to examine the role that ‘blue’ environments might play in preventive health.

‘Blue’ environments include inland bodies of water – such as lakes, rivers and canals – as well as the coasts and oceans. We’ve focused our efforts on the latter, hoping to shed light on how the sea might boost health and wellbeing, and gain insights into how the public could be encouraged to preserve and protect these environments.

Then we went big. Using data from the UK’s 2001 census to examine how health varied across the country, we found that people are more likely to have good health the closer they live to the sea. Importantly, this effect was more pronounced in deprived areas, offering a tantalising route to reducing health-inequalities.

With this and other research in the area pointing towards a link between marine environments and good health, we began thinking about possible mechanisms.

Through a number of studies we’ve found that people who visit the coast report greater levels of stress reduction, and those living close to the sea are more likely to meet UK physical activity guidelines. We’ve also considered the role that physical factors might play, finding that coastal environments receive greater amounts of sunshine, leading to coastal dwellers having higher vitamin D levels. By digging deeper we’ve discovered the picture is broader and richer than we might have imagined.

But we know these benefits don’t come for free and there has to be reciprocity. So we’re currently exploring how to promote pro-marine behaviours, such as sustainable fish choice, and tackling the growing problem of plastics in our oceans – work that is highlighting the importance of understanding public attitudes to marine sustainability issues.

Whilst this intriguing area of research is providing mounting evidence that blue environments can deliver powerful boons for wellbeing, we’re still only scratching the surface of why that might be.

So this is where the BlueHealth programme of research comes in. Through a multi-discipline approach we want to be able to demonstrate and quantify the real value of blue environments, and understand the risks involved.

We think there is tangible potential to prescribe ‘doses’ of nature and use these places and spaces in preventive medicine. By harnessing this potential and using the latest technology, we might also be able to bring some of these benefits into clinical settings, alleviating pain and improving wellbeing for people who can’t access these environments directly.

Everyone taking part is ready and raring to go, keep your eyes on this website for updates as the project starts to gather momentum. 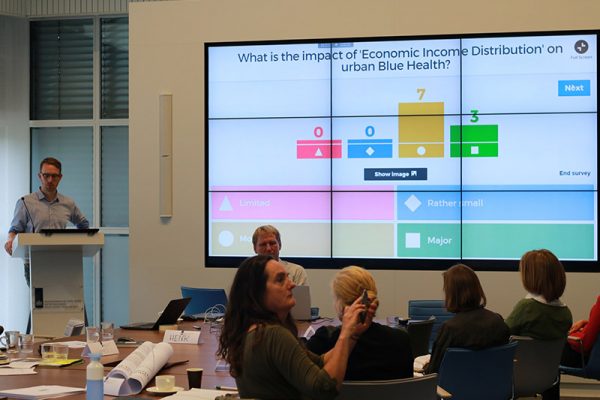